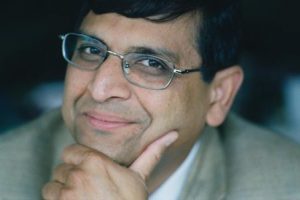 Established in 1992 in memory of high-performance computing pioneer Sidney Fernbach, the Fernbach Award recognizes outstanding contributions in the application of high-performance computers using innovative approaches. The award consists of a certificate and a $2,000 honorarium. Kumar will be presented with his award on Tuesday, 15 November at SC16 in Salt Lake City, Utah.

Prof. Kumar is known world-wide for his seminal contributions to parallel and distributed computing and to the emerging field of Big Data. His work on analyzing the scalability of parallel systems using the  isoefficiency metric has provided the basis for designing and evaluating large scale parallel computers. Algorithms and software developed by his group for solving large sparse linear systems,  graph partitioning, and high performance data mining are critical for diverse scientific, engineering, and biomedical, applications. He has played a pioneering role in bringing Big Data and earth science together to address one of the grand challenges of our times—understanding the impact of human induced changes on the earth system and its environment. Kumar is the Lead PI of a 5-year, $10 Million project, “Understanding Climate Change—A Data Driven Approach,” funded by the NSF’s Expeditions in Computing program that is aimed at defining the future of computing and information.

Kumar also served as the Head of the Computer Science and Engineering Department from 2005 to 2015 and the Director of Army High Performance Computing Research Center (AHPCRC) from 1998 to 2005.

He has authored over 300 research articles, and has coedited or coauthored 10 books including two text books “Introduction to Parallel Computing” and “Introduction to Data Mining,” that are used world-wide and have been translated into many languages. Kumar’s foundational research in data mining and its applications to scientific data was honored by the ACM SIGKDD 2012 Innovation Award, which is the highest award for technical excellence in the field of Knowledge Discovery and Data Mining (KDD).

Kumar is an ACM Fellow, a Fellow of IEEE, and a Fellow of the American Association for Advancement of Science.