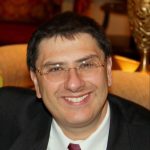 LOS ALAMITOS, Calif., 10 March 2017 – Rafail Ostrovsky, Professor of Computer Science with joint appointment from Department of Mathematics of the University of California Los Angeles, has been selected to receive the IEEE Computer Society 2017 Technical Achievement Award “for outstanding contributions to cryptographic protocols and systems, enhancing the scope of cryptographic applications and of assured cryptographic security.”

At UCLA, Professor Ostrovsky serves as Director of the Center of Information and Computation Security (CICS), a multi-disciplinary research center of Henry Samueli School of Engineering and Applied Science. Professor Ostrovsky graduated 23 Ph.D. students, who went on to work at leading research labs and universities, including Berkeley, CMU, Johns Hopkins University, and University of Pennsylvania.

He is co-founder of Stealth Software Technologies, Inc. — a UCLA startup that focuses on computing with privacy for the Federal Government. Professor Ostrovsky served as chair of the 2011 FOCS Program Committee and currently serves as chair of the IEEE Technical Committee on Mathematical Foundations of Computing.

Dr. Ostrovsky is a Fellow of IEEE as well as a Fellow of IACR (International Association of Cryptologic Research) and recipient of multiple awards and honors, including the Pazy Award (2012) and the Henry Taub Prize (1993).

The IEEE Computer Society Technical Achievement Award is given for outstanding and innovative contributions to the fields of computer and information science and engineering or computer technology, usually within the past 10, and not more than 15, years. Contributions must have significantly promoted technical progress in the field.

The other 2017 award winners are Professors Hui Lei, Baba Vemuri, and Ingrid Verbauwhede.

View more information about the Technical Achievement award, including a list of past recipients.

The award consists of a certificate and a $2,000 honorarium. The Computer Society plans to present this award at the annual awards ceremony on 14 June 2017 in Phoenix, Arizona, USA.