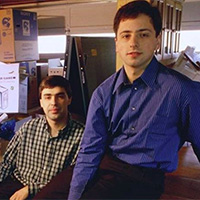 This award acknowledges significant contributions to early concepts and developments in the electronic computer field that have clearly advanced the state of the art in computing. Brin and Page are being recognized “for the creation of the Google search engine and leadership in creating ambitious products and research initiatives.”

Together, Brin and Page developed the PageRank algorithm and used it to build Google’s search engine, which is now the most-used search engine in the world. Two heavily cited papers describe their early work:

Since their initial technical work, both have been heavily involved in steering Google and Alphabet’s technical portfolio of products and research projects, often making significant and convincing arguments to other Google engineers about why a particular project that seemed implausible or infeasible was actually achievable and worth pursuing. Examples include Google Street View (“Let’s add photos to maps so people can see what a street looks like in real life”), Google Books (“Let’s scan all of the world’s books and make their contents searchable”), Google’s self-driving car project (which started in 2009, much earlier than other commercial efforts in this area), and many others.

Fellows of the American Academy of Arts & Sciences, Brin and Page are both recipients of the Marconi Foundation Prize and members of the National Academy of Engineering.

They met at Stanford University, where both were PhD students in the Computer Science Department. As a research project, they developed an algorithm that counted the number and quality of links to a webpage to determine a rough estimate of how important the website is. This was used to rank websites in the search engine they developed — and named Google, inspired by the mathematical term “googol,” to reflect their mission to organize the immense amount of information available on the Internet.

The Computer Pioneer Award was established in 1981 by the IEEE Computer Society Board of Governors to recognize and honor the vision of those whose efforts resulted in the creation and continued vitality of the computer industry. The award acknowledges outstanding individuals whose main contribution to the concepts and development of the computer field was made at least 15 years earlier.

Past recipients of the award include Frances Allen, Grady Booch, Edgar Codd, Douglas Engelbart, Edward Feigenbaum, Tony Hoare, Robert Kahn, Jack Kilby, Dennis Ritchie, and David Wheeler. Further information about the Pioneer award, including a list of all past recipients.

The IEEE Computer Society, a not-for-profit organization, is the world’s home for computer science, engineering, and technology. A global leader in providing access to computer science research, analysis, and information, the IEEE Computer Society offers a comprehensive array of unmatched products, services, and opportunities for individuals at all stages of their professional career. Known as the premier organization that empowers the people who drive technology, its unparalleled resources include membership, international conferences, peer-reviewed publications, a unique digital library, standards, and training programs.