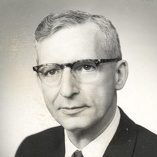 Charles Concordia was born on 20 July 1908 and grew up in Schenectady, NY.

He was an excellent student and went straight from high school to work at the General Electric Company. Although he continued his studies part time at Union College in these early years, it would be until 1971 that he received an (honorary) D.Sc. from the college, and later receiving an honorary D.Sc. from the Iowa State University.

For his first few years at GE Concordia worked on early television research, and then joined the company’s ‘test program’, an advanced engineering course, graduating in 1934. His work gravitated to systems engineering and electric utility, and he became G.E.’s consultant to public utilities, advising on system protection and reliability. During World War II, he worked on generators and turbines for naval destroyer propulsion, researched superchargers for airplanes, and helped develop ships’ electrical drives. In the 1940s, he chaired AIEE’s subcommittee on large-scale computing devices and continued his consulting work after the war. He retired from G.E. in 1973 but continued independent consulting for clients such as Westinghouse and power companies in Taiwan and Hong Kong. He also served on the Advisory Panel to the Federal Power Commission as it dealt with the after-effects of two blackouts and served internationally as a blackout consultant.

His accomplishments made him a well known power systems engineer and expanded field in the planning, operation and security of extended power systems. His theory of electric machines and his effect on the dynamic analysis of interconnected electric power systems, electrical machinery, and automatic control systems all made a significant impression on the field. In the 1940s, he pioneered the idea that synchronous machines’ voltage-regulator characteristics affect their stability. In 1951, he wrote Synchronous Machines -Theory and Performance, which became a well known text. By the end of his career he had accumulated six patents and published over 130 papers.

A Fellow of the IEEE, ASME, and AAAS, Dr. Concordia was a member of the NAE and NSPE. He was Chairman of the IEEE Research and Transfers Committee, as well as a member of the IEEE Publications and Spectrum Editorial Boards, and the Power System Engineering Committee. He helped start and then chaired the first committee on computing devices at the AlEE. He was Chairman of the International Study Committee on Power System Planning and Operation of the International Conference on Large Electric Power Systems (CIGRE) for nine years, and was a founder and National Treasurer of the Association for Computing Machinery.

Among the many awards bestowed upon him by the IEEE and the AIEE are the Lamme Medal, the Centennial Medal, and the Power-Life Award. He also won the Philip Sporn Award from CIGRE and both the Coffin Award and the Steinmetz Award from the General Electric Company. He is the recipient of the 1999 IEEE Medal of Honor “For outstanding contributions in the area of Power Systems Dynamics which resulted in substantial improvements in planning, operation, and security of extended power systems.”