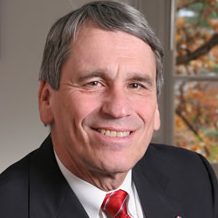 James H. Aylor has made his mark not only on his field of digital design but also on the Computer Society and the larger community of computing professionals. An innovator in the development of VHDL, the VHSIC Hardware Description Language used for describing digital hardware, Aylor’s leadership within the Computer Society extends back almost 20 years. Recently reappointed to a second term as editor-in-chief of Computer, Aylor has served the magazine for five years, working as associate editor-in-chief from 1995 until 1999, when he became editor-in-chief. Prior to his involvement with Computer, Aylor was an associate editor of IEEE Micro from 1981 to 1985.

The Computer Society’s president in 1993, Aylor has also served on the Society’s Board of Governors and completed terms as Society vice president for Publications, Press Activities, and Conferences and Tutorials. After his term as Society president, Aylor was elected IEEE division VIII director, sitting on the IEEE Board of Directors as a representative of the Computer Society’s interests. The Louis T. Rader Professor and chair of electrical engineering at the University of Virginia, Aylor’s association with that institution goes back more than 20 years.

In the mid-1980s, Aylor was instrumental in founding UVA’s Center for Semicustom Integrated Systems, a research center focused on the design and implementation of complex electronic systems. With Aylor as its director, the CSIS gained recognition from the commonwealth of Virginia and became one of several statewide Technology Development Centers that advance research and increase technology based jobs in Virginia. An IEEE Fellow “for developments in the use of computer technology for persons with disabilities” and a member since 1966, Aylor is also a member of the American Association for the Advancement of Science and of the Sigma Xi and Tau Beta Pi honor societies.

1999 Richard E. Merwin Award for Distinguished Service
“For dedication and sustained long-term leadership resulting in the development of significant innovations in Computer Society products and services, especially in the area of printed and electronic publications.”
Learn more about the Richard E. Merwin Award