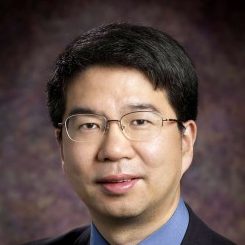 Jason Cong is a Chancellor’s Professor at the Computer Science Department, also with joint appointment from the Electrical Engineering Department, of University of California, Los Angeles, the director of Center for Domain-Specific Computing (CDSC), and the director of VLSI Architecture, Synthesis, and Technology (VAST) Laboratory. He served as the chair the UCLA Computer Science Department from 2005 to 2008. Dr. Cong’s research interests include energy-efficient computing, customized computing for big-data applications, electronic design automation, and highly scalable algorithms.  He has over 400 publications in these areas, including 10 best paper awards, two 10-Year Most Influential Paper Awards, and the 2011 ACM/IEEE A. Richard Newton Technical Impact Award in Electric Design Automation. He was elected to an IEEE Fellow in 2000 and ACM Fellow in 2008.  He is the recipient of the 2010 IEEE Circuits and System (CAS) Society Technical Achievement Award “For seminal contributions to electronic design automation, especially in FPGA synthesis, VLSI interconnect optimization, and physical design automation.”