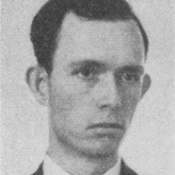 Jean H. Felker (A’46) was born in 1919 at Centralia. In 1941 he received the B.S. degree in electrical engineering from Washington University, in St. Louis, Mo. After graduation he was associated with the Emerson Electric Co., and later he instructed at a Naval Training School in St. Louis, Mo. In 1942, he joined the U. S. Army, and served as a JEAN H. FELKER radar maintenance officer attached to the Royal Artillery in Great Britain, as a member of the Electronics Training Group. Later he returned to this country as an Army publications officer. Since 1945, Mr. Felker has been a member of the technical staff of the Bell Telephone Laboratories, and has worked on computer circuits.