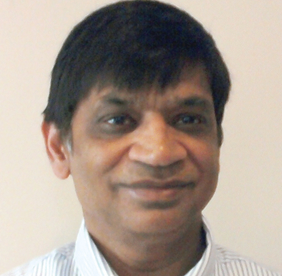 Krishna Kant is a professor in the Computer and Information Science Department at Temple University in Philadelphia, PA where he directs the center for research in energy and configuration management. Earlier he was a research professor in the Center for Secure Information Systems (CSIS) at George Mason University. From 2008–2013, he served as a program director at the National Science Foundation (NSF) where he managed the computer systems research (CSR) program and was instrumental in the development and running of NSF-wide sustainability initiative called SEES (science, engineering and education for sustainability). His current areas of research data center networks and storage systems, energy and configuration management in data centers, smart grid security, wireless communication in challenging environments including intrabody communications, and IoT systems for a variety of emerging smart city applications. Prior to NSF, he served at Intel Corporation for 11 years working on a variety of data center architecture and technology issues. From 1991 to 1997, he held the consultant position at Ericsson (formerly Bellcore) and worked on many broadband and narrowband telecommunications technologies. Prior to 1991, he was an Associate Professor of Computer Science at the Pennsylvania State University with research contributions in performance modeling and distributed systems. From 1981–1984, he was an assistant professor in the EECS department of Northwestern University. He received his Ph.D. degree in Mathematical Sciences from the University of Texas at Dallas in 1981. He carries a combined 41 years of experience in academia, industry, and government. He has published 200+ papers in a large variety of areas in computer science, authored a graduate textbook on performance modeling of computer systems, and coedited two books on cyber-physical infrastructure and cloud computing security. He is a Fellow of the IEEE.

Misconfigurations in large systems are responsible for up to 80% of downtimes and a similar percentage of all cyber-attacks that exploit those misconfigurations. Often configuration problems take days or weeks to resolve and cost billions of dollars. Further complications arise due to inherently multiparty nature of the environment in which the cloud services and applications operate. In this talk I will talk about the challenges in this important area and elaborate on our work in the area of configuration selection, configuration health index, and configuration diagnosis in a multiparty environment.

End to End Quality of Service in Networked Cloud Storage

Nearly all storage inside a cloud infrastructure is networked and continues to evolve rapidly in terms of device technology, access protocols, and requirements of the applications. Newer storage and persistent memory technologies place considerable stress on the network, yet many applications increasingly demand both low and deterministic IO delays. This talk will first provide an overview of emerging storage technologies, access protocols, and application needs. It will then discuss the challenges in ensuring the end-to-end quality of service in networked storage and some solutions based on our ongoing work in the area.

Internet of Things (IoT) systems are becoming ubiquitous in various cyber-physical infrastructures with scales ranging from smart homes to smart cities. Often multiple such IoT subsystems are deployed in the same physical area and designed, deployed, and even managed by different vendors or organizations (or “parties”) with limited visibility by other parties. This can lead to potentially conflicting operations that must be detected and resolved to maintain safe operation of the entire system. This talk will discuss the interplay of visibility limitations and conflict detection/resolution ability. It will also discuss the associated issues of granting minimal access privileges for resolving conflicts, and proactively anticipating and defensively resolving them in a context dependent manner.

End to End Quality of Service in Networked Cloud Storage