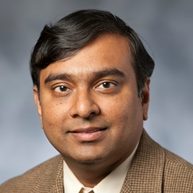 Krishnendu Chakrabarty received the B. Tech. degree from the Indian Institute of Technology, Kharagpur, in 1990, and the Ph.D. degree from the University of Michigan, Ann Arbor, in 1995. He is now the William H. Younger Distinguished Professor in the Department of Electrical and Computer Engineering and Professor of Computer Science at Duke University. Prof. Chakrabarty is a recipient of the National Science Foundation Early Faculty (CAREER) award, the Office of Naval Research Young Investigator award, the Humboldt Research Award from the Alexander von Humboldt Foundation, Germany, 10 best paper awards at major IEEE conferences, and the IEEE Transactions on Computer-Aided Design Donald O. Pederson Best Paper Award (2015).

Prof. Chakrabarty’s current research projects include testing and design-for-testability of integrated circuits, microfluidic biochips, and optimization of enterprise systems. Prof. Chakrabarty is a Fellow of ACM, a Fellow of IEEE, and a Golden Core Member of the IEEE Computer Society. He holds five US patents, with several patents pending. He was an Invitational Fellow of the Japan Society for the Promotion of Science in 2009. He has served as Distinguished Visitor of the IEEE Computer Society (2005–2007, 2010–2012), Distinguished Lecturer of the IEEE CAS Society (2006–2007, 2012–2013) and ACM Distinguished Speaker (since 2008). He has supervised 25 PhD dissertations and his students have won notable awards such as the European Design Automation Automation outstanding PhD Dissertation Award (three times) and the IEEE CAS Society Young Author Award (two times). He has been honored with the 2008 Duke University Graduate School Dean’s Award for excellence in mentoring, and the 2010 Capers and Marion McDonald Award for Excellence in Mentoring and Advising,