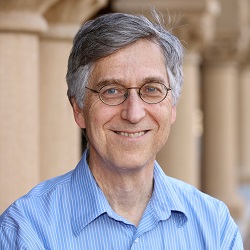 Mark Horowitz is the Yahoo! Founders Professor at Stanford University and was chair of the Electrical Engineering Department from 2008 to 2012. He received his BS and MS in Electrical Engineering from MIT in 1978, and his PhD from Stanford in 1984. Dr. Horowitz has received many awards including a 1985 Presidential Young Investigator Award, the 1993 ISSCC Best Paper Award, the ISCA 2004 Most Influential Paper of 1989, the 2006 Don Pederson IEEE Technical Field Award, the 2011 SIA Faculty Researcher Award, and the ChipEx Global Leadership Award in 2015. He is a fellow of the IEEE and the ACM and is a member of the National Academy of Engineering and the American Academy of Arts and Science.

Dr. Horowitz’s research interests are quite broad and span using EE and CS analysis methods to problems in molecular biology to creating new design methodologies for analog and digital VLSI circuits. He has worked on many processor designs, from early RISC chips to creating some of the first distributed shared memory multiprocessors. He has been working on low power computation since the 1990s. In 1990, he took leave from Stanford to help start Rambus Inc, a company designing high-bandwidth memory interface technology, and his work at both Rambus and Stanford drove high-speed link designs for many decades. In the 2000s he started a collaboration with Marc Levoy in computational photography which led to light-field photography and microscopy. His current research includes updating both analog and digital design methods, agile hardware design, and applying engineering to biology.