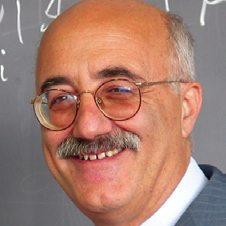 Professor Michele Parrinello is known for his many technical innovations in the field of atomistic simulations and for a wealth of interdisciplinary applications ranging from materials science to chemistry and biology. Together with Roberto Car he introduced ab-initio molecular dynamics, also known as the Car-Parrinello method, marking the beginning of a new era both in the area of electronic structure calculations and in molecular dynamics simulations. He is also known for the Parrinello-Rahman method, which allows crystalline phase transitions to be studied by molecular dynamics. More recently he has introduced metadynamics for the study of rare events and the calculation of free energies. For his work he has been awarded many prizes and honorary degrees. He is a member of numerous academies and learned societies, including the German Berlin-Brandenburgische Akademie der Wissenschaften, the British Royal Society and the Italian Accademia Nazionale dei Lincei, which is the major academy in his home country Italy. Born in Messina in 1945, he received his degree from the University of Bologna and is currently professor of Computational Sciences at ETH in Switzerland. 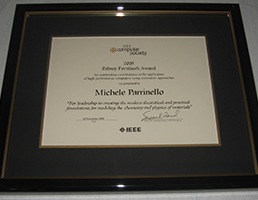 2009 Sidney Fernbach Award
“For leadership in creating the modern theoretical and practical foundations for modeling the chemistry and physics of materials. The software resulting from this work is one of the enabling tools for materials science modeling.”
Co-recipient with Roberto Car
Learn more about the Sidney Fernbach Award