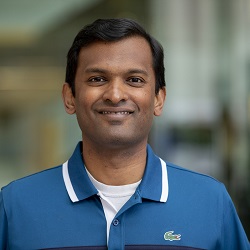 Nachiappan Nagappan is a Partner Researcher at Microsoft Research where he works in the Software Analysis and Intelligence (SAINT) team. He also holds an adjunct faculty appointment at IIIT New Delhi. His research has been in the field of Data Analytics and Machine Learning for Software Engineering focusing on Analytics for Empirical Software Engineering, Software Reliability, Software Metrics, and Developer Productivity. His research projects are fairly interdisciplinary and span the spectrum of software analytics ranging from intelligent software design for games; identifying data center reliability to individual developer and team productivity. More recently his work has focused on the intersection of SE and AI.

His work has had foundational impact on software engineering practice by investigating many important beliefs about software engineering that used to have little to no empirical evidence. His work on investigating the efficiency of assertion usage in large scale software development led to the use of assertions in the Mars Rover by NASA. His work was the first to quantify the existence of Conway’s law in four decades. He was also the first to quantify the cost benefit tradeoff of doing test-driven development. He empirically showed that, contrary to popular belief, distributed development did not produce poor quality code.

His research results have impacted the broader software engineering industry as well as several product divisions within Microsoft about building and shipping software. His work is often cited and discussed in developer forums and has influenced the developer community towards building better quality software. His work has also shipped as features to millions of users via Windows, Visual Studio, Mobile devices, Forza, Halo etc. His proudest achievement is the fact that all his research work has been done jointly with several collaborators across the globe.

He has published over 100 journal and conference publications of which eight have received distinguished or best paper awards. His research has also won multiple Most Influential Paper/ Test-of-Time awards for 10 year (ESEC/FSE), 30 year (ISSRE) and 50 year (SIGCSE) best papers.

He has been a member of multiple National Academy of Science boards. He has served as program co-chair for the Empirical Software Engineering and Measurement conference (ESEM) and the International Symposium on Software Reliability (ISSRE). Since 2009 he has been on the editorial board of the Empirical Software Engineering journal. He is an ACM Distinguished Scientist and IEEE Senior member. He received his PhD in Computer Science from North Carolina State University.