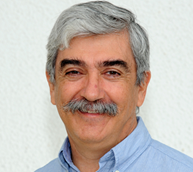 He was a full time investigator at the Instituto de Investigaciones Eléctricas (Electrical Research Institute) now called National Institute of Electricity and Clean Energies (INEEL) from 1983 and he retires in 2019. He worked at the Electronics department and at the Control and Instrumentation department. He has been a professor of Intelligent Systems at the ITESM Campus Cuernavaca since 1998. He also has been part time professor at the Renewable Energies Institute (IER) in the National Autonomous University of Mexico (UNAM) in 2015 and 2016.

He has published several national and international articles and participated in several congresses. He has directed several B.Sc., M.Sc. thesis and he was co-assessor of a Ph.D. Thesis at the ITESM Campus Cuernavaca.

At the INEEL, he has participated in research and development projects involving artificial intelligence applications for the energy sector. Some examples of developed projects are:
1. Diagnosis of wind turbines using behavioral models. Using historical data from the SCADA, he proposes and learns the normal behavior of the turbine under different operational conditions. Thus, some incipient deviations of the normal behavior can be identified and alarms issued.
2. Forecast of wind energy in wind farm. Utilized historical data from meteorological stations from the wind farm and from near sites, he developed dynamical Bayesian networks for forecasting wind speed and hence, wind energy.
3. Virtual sensor for fuel viscosity in thermolectrical power plants. Using historical data from the distributed control system of a thermoelectrical power plant, and using a viscosimeter, he learn Bayesian networks that are able to infer the viscosity of the fuel given the combustion conditions on the plant. This viscosity meter allows optimizing the combustion of the boiler increasing efficiency and decreasing contamination.

Artificial Intelligence (AI) is invading all fields of human activities: medicine, security, communications and energy is no exception. This conference is about the different AI applications that have been made in the energy sector. First, dynamic models were used to predict wind and therefore wind power in a wind farm. Second, using pattern recognition techniques, a diagnostic system for electrical power transformers based on vibration signals was constructed. The normal vibration model of the transformer was generated to be able to detect deviations from this normal behavior. Third, using probabilistic models, a virtual fuel viscosity sensor was designed to optimize combustion in a thermoelectric plant. Virtual sensor is an estimator of viscosity based on related combustion values. Finally, the design of a behavior model is presented that allows detecting early deviations from normal behavior. The case study was carried out with the diagnostic design of a wind turbine. The model was learned with historical data from the turbid working correctly.

This presentation concludes with the enormous possibilities that AI has in the electricity and energy sector in general.

Artificial Intelligence (AI) is invading all fields of human activities: medicine, security, communications and energy is no exception. This conference is about the different applications of probabilistic graphical models, as part of the AI techniques that have been carried out in the energy sector.
Probabilistic graphical models are briefly described, specifically Bayesian networks, and the applications that have been carried out in wind farms. First, dynamic Bayesian networks were used to predict wind and therefore wind power in a farm. Weather signals from the farm were used to infer wind speed and direction. Models of the behavior of the wind turbine were also developed to be able to detect the incipient presence of faults. Models of farm behavior were also learned using the behavior signals of the individual turbines and the turbines as a whole to diagnose the farm.