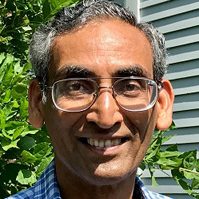 Dr. Ravi Nair is a researcher at the IBM Thomas J. Watson Research Center. He joined IBM after graduating with a B.Tech. degree in electronics and electrical communication from IIT Kharagpur and with M.S. and Ph.D. degrees in Computer Science from the University of Illinois at Urbana-Champaign. While at IBM, he spent a sabbatical year at Princeton University and also taught at Columbia University.

Early in his career, Dr. Nair was active in the area of Electronic Design Automation, especially test pattern generation for memories, system diagnosis, and integrated circuit layout. He co-designed, built, and programmed the first parallel processor in IBM Research, a Z80-based 64-processor special purpose machine for integrated circuit layout. Dr. Nair then worked on the microarchitecture of IBM’s RISC and mainframe processors, particularly on branch prediction, instruction fetch design, data-flow, and multithreading techniques. He worked on several heterogeneous architectures to exploit instruction-level and data-level parallelism. Notable among these are the DIF (Dynamic Instruction Formatting) architecture, the IBM Cell processor architecture, and the Active Memory Cube, the last of which merges concepts in heterogeneous computing with concepts in near-data processing to meet the stringent power, scalability, and performance requirements of future supercomputers. Dr. Nair has also worked in the area of multiprocessor virtualization, approximate computing, and distributed deep learning. In all these areas, Dr. Nair has published extensively, with 46 papers in journals and conferences, 15 research reports and 68 US patents. He has also co-authored a book on “Virtual Machines”. Dr. Nair has several awards for his work at IBM, where he is a Distinguished Research Staff Member, a member of the Academy of Technology, and a Master Inventor. He is also a Fellow of the IEEE.

Dr. Nair is currently working in the area of artificial intelligence, aiming to understand how AI can be made more effective, not only from a performance point of view, but also from an ethical point of view.