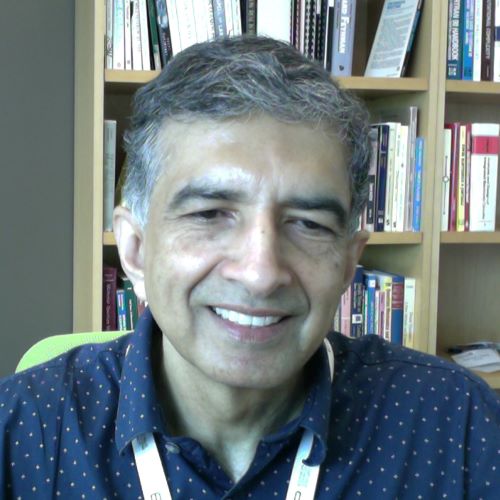 Salman Habib is the Director of Argonne’s Computational Science (CPS) Division and an Argonne Distinguished Fellow. He holds joint positions in Argonne’s High Energy Physics (HEP) Division and at The University of Chicago and Northwestern University. He is a Fellow of the American
Physical Society. Salman moved to Argonne in 2011, after 20 years in Los Alamos National Laboratory’s Theoretical Division. He received his PhD in physics from the University of Maryland in 1988, and was a CITA National Fellow at the University of British Columbia before moving to Los Alamos, where he first encountered parallel supercomputers — the Thinking Machines CM-200 and later the CM-5, which was then the world’s fastest system.

Ever since those early days, a fortunate nexus of scientific possibilities, interesting ideas, computational power, and opportunities to learn from gifted friends and collaborators have led Salman to supercomputing-driven forays in diverse areas: dynamics of coherent nonlinear structures, beam dynamics in accelerators, nonequilibrum quantum field theory, stochastic ODEs and PDEs, the quantum-classical transition, quantum control theory, and the formation of structure in the Universe. He regards the role of supercomputers as engines of scientific exploration and discovery to be one of key prominence — then as now.

Supercomputers have continued to evolve rapidly, not only as powerful tools to solve canonically “hard” problems, but also to attack complex end-to-end modeling challenges. In this area, Salman has been deeply involved in the development of large-scale cosmological simulations (the MC2 and HACC codes) and related analysis tools. In particular, solving scientific inference problems in cosmology using a finite set of supercomputer simulations has seen significant development via a long-term — and very enjoyable — collaboration with cosmologists and statisticians. Salman’s current interests also cover other issues in
data-intensive computing, including applying ideas from statistics and machine learning to elucidating problems in physics.