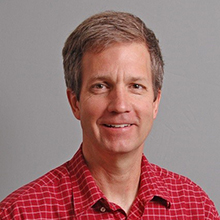 Steve Plimpton is a distinguished member of technical staff in the Center for Computing Research at Sandia National Laboratories, where he has been for nearly 30 years. He received his Ph.D. in Applied & Engineering Physics from Cornell University in 1989.

Steve’s research has been primarily focused on methods and parallel algorithms for a variety of particle-based HPC applications. Along the way he contributed to a few combinatorial algorithms for problems like contact detection and radiation transport. He is best known for leading the development of open-source codes used for modeling materials at different scales. These include LAMMPS (classical molecular dynamics), SPPARKS (Monte Carlo modeling of materials processing at the mesoscale), and SPARTA (DSMC modeling of turbulence and flow in low-density gases). The most widely used of these is LAMMPS which has a world-wide community of 1000s of users and 100s of code contributors. He has also worked on MPI-based tools for big data processing on HPC platforms, including MapReduce and stream-processing libraries. He is a Fellow of the American Physical Society (APS) and has also been honored with a special session at the Minerals, Metals & Materials Society (TMS) annual meeting for the development of LAMMPS.