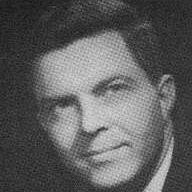 Mr. Anderson holds the B.E.E. and M.S.E.E. degrees from the University of Minnesota. He also completed the Navy Radar Schools at Bowdoin College and at Massachusetts Institute of Technology. From 1944 to 1946, he was on active duty as a U.S. Navy Reserve Lieutenant (j.g.), responsible for airborne radar and electronics equipment on various aircraft carriers.

From 1946 to 1948, Mr. Anderson was employed by Engineering Research Associates, Inc., St. Paul, Minn., where he developed circuits for a large-scale fixed program computer, and desgined magnetic recording circuits for the ERA 1101 computer. He was the co-developer of the first successful coating of magnetic storage drums by an oxide spraying technique. From 1949 to 1954, he was employed by Engineering Research Associates, Arlington, Va., which became a division of Remington Rand, Inc. This was the Planning Department of the company and he was head of the Electronics Section, which conducted analysis and system studies for various digital computers and communications systems.

He was Vice President for Operations, at General Kinetics, Inc. Arlington, Va., which provided computer application services, including problem solving, compilers, and computer application feasibility studies, and which also has a product line of preventive maintenance equipment for large scale users of magnetic tapes. Mr. Anderson has been active in IRE affairs. He served in 1955–1956 as Vice Chairman of the Washington, DC Chapter of PGEC; in 1956–1957 as its Chairman; in 1957 as a member of the Advisory Committee and of the Printing and Publicity Committee for the Eastern Joint Computer Conference: in 1958–1960 as a member of the PGEC Administrative Committee; and in 1961 as the Vice Chairman of the PGEC Administrative Committee.

Mr. Anderson was also a member of Tau Beta Pi, Eta Kappa Nu, and the Association for Computing Machinery.