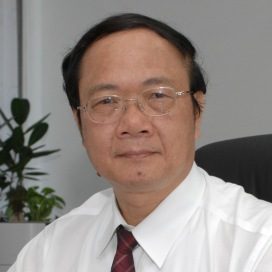 Chen joined the National Tsing Hua University in 1976 at a time when there were no ICT industries in Taiwan. He has since witnessed and contributed to its development into a powerhouse for ICT technologies and products in the world. Chen helped found the Department of Computer Science of the National Tsing Hua University and founded the College of Electrical Engineering and Computer Science of the university. He has vastly expanded the capacity of the university in educating young talents for the ICT industries in Taiwan and worldwide. For four years starting in 1988, Chen was a science and technology advisor to the Ministry of Education and helped establish the Taiwan Academic Network (TANet), the first Internet in Taiwan, which served as the foundation for developing public as well as commercial Internets in the next two decades in Taiwan.

From 1992 to 1996, Chen served as director of the Advisory Office of Ministry of Education. He helped improve the information infrastructure of K-12 schools and initiated the computer systems, communications, and VLSI design education programs that significantly improved research infrastructure and teaching programs in universities to cultivate talents for the expanding ICT industries in Taiwan. Chen was elected IEEE Fellow in 1994 and received the Technical Achievement Award from the IEEE Computer Society for his research accomplishments in computer networking and parallel processing in 1999. He is a Lifelong National Chair of the Ministry of Education, Taiwan.