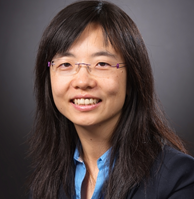 Yuhong Liu, Associate Professor at Department of Computer Engineering Santa Clara University, received her B.S. and M.S. degree from Beijing University of Posts and Telecommunications in 2004 and 2007 respectively, and the Ph.D. degree from University of Rhode Island in 2012. She is the recipient of the 2019 Researcher of the Year Award at School of Engineering, Santa Clara University, and the 2013 University of Rhode Island Graduate School Excellence in Doctoral Research Award. Her research interests include trustworthy computing and cyber security of emerging applications, such as Internet-of-things, blockchain and online social media. She has published over 60 papers on prestigious journals and peer reviewed conferences. Her papers have been selected as the best paper at the IEEE International Conference on Social Computing 2010 (acceptance rate = 13%) and the 9th International Conference on Ubi-Media Computing (UMEDIA 2016). She is actively contributing to professional societies including IEEE and Asia-Pacific Signal and Information Processing Association (APSIPA). She has contributed as an organizing committee member for over 10 international conferences and a TPC member for over 20 conferences. She is currently serving as the IEEE Computer Society Region 6 Area 4 coordinator, a member of the IEEE Computer Society Technical Meeting Request Committee, a member of the Multimedia Security and Forensics (MSF) TC for APSIPA, and an APSIPA Distinguished Lecturer (2021-2022).

Facilitating Security and Trust among Multiple Parties through Blockchain Techniques

A blockchain consists of a list of blocks that are linked based on cryptography hash and maintained by distributed network nodes, so that the information recorded in these blocks is non-repudiated. After its first conceptualization by Nakamoto in 2008, blockchain has attracted broad attention and been considered as a promising solution to establish a decentralized architecture with security. In this talk, we will discuss some key characteristics of blockchain and a few promising applications of blockchain that can facilitate security and trust among multiple parties. Some examples include applying blockchain to secure software updates for resource-constrained IoT networks; designing a secure and efficient multi-signature scheme to facilitate multi-party approval process on Fabric, an enterprise blockchain platform; and facilitating fair trading of digital-goods via a blockchain based proxy re-encryption scheme.

Facilitating Security and Trust among Multiple Parties through Blockchain Techniques