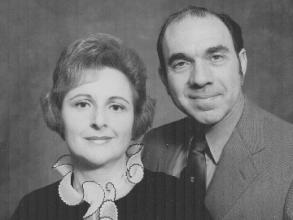 Harry Hayman, born in Lewistown, Pennsylvania, 20 March 1917, is the retired executive secretary of the IEEE Computer Society. A 1938 graduate of New York University, he started work with the Federal Communications Commission in 1940. During World War II, Harry worked as monitoring officer in the field service of the FCC and later as an enlisted man in the U.S. Navy. After the war, he got a job as an engineer in the broadcast division of the FCC. During the Korean war, he worked as a civilian engineer with the U.S. Army Signal Corps. Later, he designed, built, owned, and managed and AM radio broadcast station, WPGC, in Morningside, Maryland, which became one of the top stations in the Washington, D.C. area.

In 1965, he entered the computer profession by becoming a maintenance engineer on UNIVAC I at the U.S. Census Bureau. This was followed by his being named to the engineering management team of the U.S. Navy, which was involved in the management of the research and development of the LARC and Stretch computers for the U.S. Department of Defense. He then was assigned to the Federal Aviation Agency to assist in the research and development for an early air traffic control system. He ended his government career upon the successful conclusion of the Apollo project, where he was on the top management staff of the project with responsibilities for computers.

In 1972, with some 16, 000 members and a budget of $250,000, the Computer Society asked him to join the staff as Executive Secretary. He then helped guide the volunteers though twelve years of phenomenal growth, in which the Computer Society became the largest society of the IEEE, and the largest computer professional organization in the world. He applied management techniques, learned in Apollo and his extensive professional career, to the organization of the society. He published the first tutorial “Computer Networks”, for the society, originated publication sales and promotion, and started its fantastic growth in both number of titles and sales. Harry Hayman’s other innovations include the first catalog of Computer Society publications, the mailing list of society conferences attendees, and the use of staff assistance for conference organization and management.

Following the hiring of an Executive Director two years before his retirement, Harry was named Director of Tutorials and Conferences, the position he held when he retired in 1985, Throughout his association with the society, Harry felt a deep personal commitment to its growth and success. He was always convinced that personal interaction and caring help to its members and volunteers was an essential ingredient, and he offered his services untiringly to accomplish those goals.

Mr. Hayman and his wife, Edith, shared their time between homes in Silver Spring, Maryland, and Boca Raton, Florida. They had four children and six grandchildren.