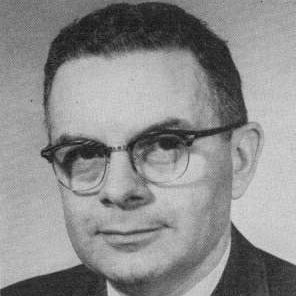 Arnold A. Cohen
1960–1962 Chair of the IRE Professional Group on Electronic Computers

Arnold A. Cohen was elected Chairman for the year 1960–1961 by the PGEC Administrative Committee.

Dr. Cohen was born in Duluth, Minn., in 1914. He received the B.E.E. degree in 1935, and the M.S. and Ph.D. degrees in physics in 1938 and 1947, from the University of Minnesota. His graduate research was in mass spectometry, ion optics, and related instrumentation techniques.

In 1942, he joined the Radio Corporation of America, where he engaged the digital computer field in 1946, when he joined the newly formed Engineering Research Associates, Inc., in St. Paul, Minn., which is now part of the Remington Rand Univac Division of Sperry Rand Corporation. In his present position as Engineering Director, System Planning, he directs advanced technical planning activities fo the Military Engineering Division of Remington Rand Univac.

A number of developments in the computer field have been identified with Dr. Cohen, including development of basic magnetic drum storage techniques. He was responsible for the systems design of the ERA 1101 and 1103 (Univac Scientific) computers. He is a co-author of the book “High Speed Computing Devices,” and has been issued a number of patents in the data processing field.

Dr. Cohen was chairman of the Twin Cities Section of IRE in 1951–1952, and spearheaded formation of the Twin Cities Chapter of PGEC in 1957. A member of the PGEC Administrative Committee since 1958, he was Vice-Chairman during the past year. In 1957, he served on the Technical Program committee of the Eastern Joint Computer Conference, and in 1958 he was Publications Chairman. He was vice-Chairman of the U.S Technical Program Committee fo the 1959 International Conference on Information Processing, and has served on a Department of Defense scientific advisory panel.

Dr. Cohen was a member of Sigma Xi, Tau Beta Pi, Eta Kappa Nu, and the Association for Computing Machinery.