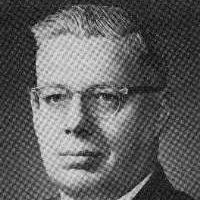 Frank J. Maginniss, a retired manager and electrical engineer at the General Electric Co. At Penn, he was a member of Sigma Chi fraternity. He joined General Electric in 1940, working in its power-generation engineering operation, first as an application engineer and finally as a manager of the analytical methods and computations section, until his retirement in 1972.

He was responsible for the development and application of many large-scale computer programs used in the solution of electric utility engineering problems worldwide. He served as chair of the American Institute of Electrical Engineers’ committee on computing devices during the 1950s, and was elected a fellow by the successor organization, the Institute of Electrical and Electronic Engineers. And he was the author of over 25 technical articles in engineering publications. He served on the boards of numerous civic, educational, and religious organizations, including Planned Parenthood and the First United Methodist Church of Schenectady.