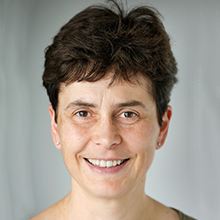 Dr. Ingrid Verbauwhede is a Professor in the research group COSIC of the EE Department of the KU Leuven in Belgium. At COSIC, she leads the embedded systems and hardware group. She is also adjunct professor at the EE department at UCLA, Los Angeles, CA. She joined COSIC in 2003 and UCLA in 1998. Before joining UCLA, she worked at UC Berkeley as a post-doctoral researcher and visiting lecturer, and later at TCSI and Atmel Lab in Berkeley, CA. She is a Fellow of IEEE and a Member of IACR. She was elected as member of the Royal Flemish Academy of Belgium for Science and the Arts in 2011. She received an ERC Advanced Grant in 2016.

She is a pioneer in the field of efficient and secure design and design methods for cryptographic algorithms in embedded context on ASIC, FPGA, and embedded SW. She has worked on circuits, architectures and HW/SW co-design for symmetric key, public key and recently post-quantum secure cryptographic algorithms. The aim is to combine efficiency (i.e. low power, small area and/or high throughput) with side-channel security and attack resistance. It also includes designing secure embedded random number generators, physically unclonable functions and special circuit styles resistant to attacks.

She is proud of the graduation of 29 Ph.D. students between 2004 and 2016; they have positions in academia and in industry all over the world.

She has been the program chair in 2007 and the general chair in 2012 of the IACR CHES (Cryptographic Hardware and Embedded Systems) workshop. She has been a member of the program committee of a large number of conferences, including CHES, DAC, DATE, ISSCC, Usenix, SIPS, ISCAS, ISLPED, Eurocrypt, Asiacrypt, and more.

She has participated in several EU funded hardware and embedded systems security projects. Currently, her research group participates in the H2020 projects HECTOR and ECRYPT-CSA. She is the author and co-author of more than 300 publications. View a list of Dr. Verbauwhede’s publications and patents.