A great design that lived less than two years

Yamaha was a developer of video display controllers or processors (VDP) in the late 1980s. The company made IBM compatible CGA display controllers such as the YGY603. The company also made the video display processor (VDP) for the Sega Genesis video game console, and the VDP for TI’s popular TI-99 calculator. Yamaha was, of course, best known for its audio signal processors but the understanding of signal processing carries over to graphics and in 1984, the company announced its 3D processor, the YGV611 Rendering Polygon Accelerator. Yamaha had been developing it for Pachinko machines.

Yamaha officially introduced the chip at Comdex in 1984. The company said the chip culminated 10 years of research into 3D and IC technology.[1]

Although the chip was a 3D coprocessor, it didn’t have any VGA capabilities. While it had no support for perspective, it created the illusion of it through manipulation of the texture map. Lighting and 3D transforms were done by the host PC. The first version didn’t have perspective correction and was only for the VL bus Pachinko machines and adapted to the PC.

At the time, Yamaha said they would bring out a second-generation chip that used DRAM to lower the board price to $300.

Shortly after Comdex, STB, Diamond, and Paradise announced they would build add-in boards (AIBs) using the chip. That drove the price down to $80, with production scheduled for the second quarter of 1995.

The chip was an immediate hit, and a few weeks later, at the GamesPC Consortium meeting, the popular Criterion Renderware took advantage of the chip to run the Renderware CyberStreet demo game. Real-time video mapping was shown on a rotating cube. [2]

Yamaha said at the time that they were working on the next-generation version. It would support DRAM, have no video support, have an integrated LUT-DAC, and display 640 × 480 maximum resolution. It was promised for the first quarter of 1995 with an SRP of less than $60.

At the meeting, we observed the same Criterion demo running on both the Yamaha and 3Dlabs hardware. In our opinion, the GLiNT ran the demo better than the Yamaha as it relates to perspective. The Yamaha chip simulates perspective by warping the texture map while the GLiNT chip calculates true perspective. For example, the demo is a street scene with building walls made of stone, much like a Doom scene. The Yamaha demo displayed straight lines as wavy, while the GLiNT displayed them as truly straight.

Many people didn’t realize it at the time, but Yamaha had been in the 3D and graphics chip business for over 10 years. For those who go back to the 1980s, Yamaha designed and manufactured the Raster Technology systems.

In February 1995, Microsoft announced it was working with Yamaha and 3Dlabs to develop 3D DDI drivers for Windows 95. Microsoft was emphatic about 3D AIB offering hardware texture mapping for games.[3]

“As the first 3D silicon available to them, the YGV611 immediately attracted the attention of independent software developers at Fall Comdex,” stated Robert Starr, YST assistant general manager and director of sales and marketing. “Only two quarters after that, the YGV612 can satisfy the requirements of DOS and Windows 95 game developers,” he concluded.

Yamaha claimed the YGV612 could render 300,000 Gouraud shading polygons/second and 150,000 texture-mapped 50-pixel polygons/second With its Z-buffer capabilities, said the company, the chip can easily perform hidden surface removal. Like the 611, The YGC612 supported resolutions up to 1280 × 1024 with 64K colors.

However, unlike the 611, the YGV612 used the PCI bus and the VL-bus (with glue logic). Yamaha predicted AIBs would be in the $250 range ($625 today, closer to what modern AIBs sell for). Once again, Western Digital adopted and used it in their Paradise Tasmania 3D AIB. 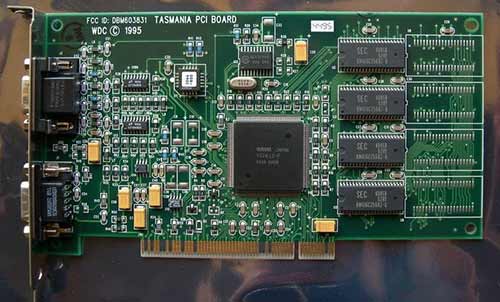 The lack of a standard API was the weak link at the time. Western Digital and others didn’t expect a standard interface layer for 3D APIs or applications until the second half of 1996 with Direct3D from Microsoft fully defined and a Direct3D hardware abstraction layer (HAL) in place. That meant that the semiconductor suppliers had to partner with software vendors and try to pick one who had the most games supported. All the semiconductor suppliers with the game companies struggled to get some DOS games running by Christmas. After that, support from the DOS incarnations of RenderWare, BRender, and Reality Lab was expected to bring additional titles.

Western Digital decided to use the popular polygon rendering approach Yamaha was offering. An alternative rendering technique, quadratic texture mapping, was being promoted by Nvidia with their NV1 chip.

If you’ve read other editions of this series, you’ve seen my reference to the following chart. 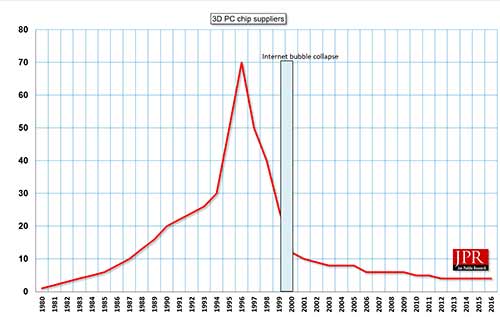 Figure 3: The rise and fall of 3D chip suppliers

Yamaha was a victim of the times too. By 1996 the PC market was at its peak. But venture capital shifted from hardware to software, The Internet was the future, and if a company didn’t have an Internet story to tell, it just wasn’t interesting.

Peaking in 1994, the US’s GDP started sliding. Even though unemployment was going down, dozens of promising startups failed because they couldn’t find supporting partners or customers or investors. In 1994 and 1995, the Federal Reserve Board raised short-term interest rates by three percentage points. As long-term interest rates rose faster than short-term rates, employment growth fell from 3% to below 2%.

Yamaha shifted its interest and investment and put its R&D money into new audio processors and Arm-based multimedia chips. There was no YGY613 or any other 3D parts coming out of Yamaha after 1996.

Yamaha was a pioneer in graphics chips, beginning in the 1980s, and a leader in 3D. It was surprising and sad to see them leave the category. But, taking the long view, their presence in the 3D chip market could be seen as a flash-in-the-pan, having been in the market for less than two years.

The company retreated to the Pachinko market and in 2020 was shipping the YGV635 (G2). A new version, the GP3 is in production, but this will probably be their last Pachinko chip.

Rumor tells they are dropping out of the market as the market size keeps shrinking.