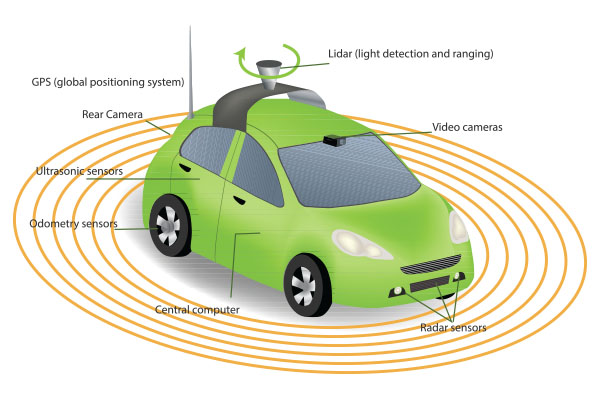 An MIT study predicted last year that shared, self-driving cars may take so many vehicles off the road—perhaps 80% of them—that a new class of ‘exurbs’ in the U.S. may spring up within a decade.

“With fewer cars, much of this space could be freed for other uses. Such reduction in car numbers would also dramatically lower the cost (and related energy consumption) of building and maintaining roads,” said MIT’s Matthew Claudel and Carlo Ratti. One engineering study, they noted, found that automation could quadruple capacity on any given highway—and fewer cars translate to less noise and a small environmental impact.

These self-driving vehicles will eventually blur the lines between public/private transportation modes.

“Your car could give you a lift to work in the morning and then give a lift to someone else in your family—or, for that matter, to anyone else: after delivering you to your destination, it doesn’t sit idle in a parking lot all day,” said Claudel and Ratti.

Driverless cars will be ubiquitous, albeit it will take awhile. According to market research firm IHS, sales of autonomous cars, including driver control, will kick off by 2025 and could top almost 12 million by 2035. By 2050 or shortly thereafter, IHS says almost all vehicles will be autonomous.

Seven states and Washington, DC have already enacted laws for testing autonomous vehicles. Michigan has introduced legislation allowing self-driving cars to be operated on any of the states 122,000 miles of roads. The Detroit News reported that the legislation would also allow for on-demand autonomous vehicle networks operated by manufacturers “such as a fleet of self-driving Chevrolet Bolt EVs that General Motors Co. is developing with ride-hailing company Lyft Inc.”

“It’s an entire mobility program encouraging anybody and everybody in auto vehicles to come to Michigan and do their research and development, and put it to practical purposes,” said Sen. Mike Kowall (R-White Lake Township), who introduced the legislation.

But the concept of driverless cars has yet to catch on with drivers. A University of Michigan study found that less than 20% of respondents indicated they preferred a self-driving car; the vast majority still want to have control while out on the road.

And in addition to a slew of security, regulatory, liability and economic hurdles to overcome, the technology’s not quite there yet. Electronic, mechanical and software components in driverless cars must operate almost flawlessly. Forbes said this robustness must pass muster under adverse conditions—“freezing, wet, boiling; long duty cycles, less than perfect maintenance (car owners being human), fender benders, network and electrical outages, and so on.”

Another issue—wireless bandwidth capacity. It will have to be increased, maintained, and fast enough to allow for quick response times to situations ranging from jaywalkers to erratic cyclists.

But the promise of driverless cars is enormous—worldwide, more than a million people are killed each year in traffic accidents, and most of these deaths are attributed to human error.

MIT’s Claudel and Ratti further expounded that “as autonomous driving matures, one thing is all but certain: the world’s mobility challenges will increasingly be met with silicon rather than asphalt.”